Cognitive Semiotics provides a complete theory of a semiotic mind, showing the connections between thought, signs, representations and language 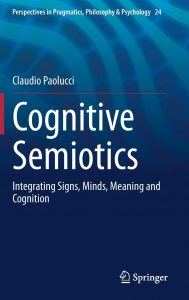 This volume serves as a reference on the field of cognitive semantics. It offers a systematic and original discussion of the issues at the core of the debate in semiotics and the cognitive sciences. It takes into account the problems of representation, the nature of mind, the structure of perception, beliefs associated with habits, social cognition, autism, intersubjectivity and subjectivity. The chapters in this volume present the foundation of semiotics as a theory of cognition, offer a semiotic model of cognitive integration that combines Enactivism and the Extended Mind Theory, and investigate the role of imagination as the origin of perception. The author develops an account of beliefs that are associated with habits and meaning, grounded in Pragmatism, testing his Narrative Practice Semiotic Hypothesis on persons with autism spectrum disorders.  He also integrates his ideas about the formation of the theory of mind with a theory of subjectivity, understood as self-consciousness which derives from semiotic cognitive abilities.  This text appeals to students, professors and researchers in the field.